The original vintage Star Wars action figures changed everything.  With movable arms and legs and lots of accessories, yet inexpensive and mass distributed,  toy history changed when Kenner released these 2 to 4 inch figures in 1978 after presales begain in 1977.  Years later, ending in 1985, 115 standard figures were released with an incredible 10 million having been sold.

Star Wars figures are sold even today, having been revived by the more recent films.  Thie page will focus on the original, vintage Kenner action figure lines.

Droids     Ewoks    Cardbacks and Promotions   Did You Know?

The first Star Wars figures were released in the Early Bird set that included Luke Skywalker, Princess Leia, Chewbacca and R2-D2.  This set could only be obtained by mailing in the Early Bird certificate that came with the Star Wars Early Bird Certificate Package - a novel marketing idea necessitated by the fact that Kenner was still creating the toys kids who had been flocking to the movie were demanding.  This package, sold mainly between July, 1977 and December 1977 (just in time for Christmas) included a display stand (no pegs), membership information, stickers and of course the beloved action figure redemption certificate.

The Empire Strikes Back Action Figures

The Return of the Jedi Action Figures

The Power of the Force

The Droids series figures were sold with a gold coin (except for Vlix).

The Ewoks series figures were sold with a gold coin.

The majority of vintage Star Wars figures came packaged on a 6" x 9" card with a bubble or blister attached and the figure inside. The backer cards went through many changes in the line's eight-year history creating many variations.   The most often used terminology for labeling these different cards stems from the number of action figures pictured on the back. Thus a 20-back has 20 figures pictured on the back of the card. A letter system is also used to designate the logo on the card. A 65-ROTJ back, then, would be a card with 65 figures on the back and the Return of the Jedi logo on the front.

Probably the most popular with collectors, the �twelve backs� are highly valued because they were the first figures released (and thus command higher prices). It is interesting to note that there are instructions on the 12-backs for using the telescoping lightsaber feature that was originally planned for Luke, Ben, and Darth. The saber feature was modified (to a more simple pull-out feature), but the text still made it onto the packaging. 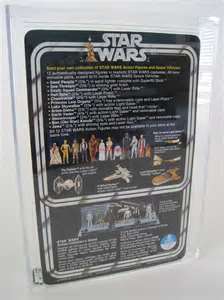 Star Wars cards were also released with 20 backs which showed the first two set of figures and then on 21-backs which included the Boba Fett figure.

The last Star Wars header card was actually a 32-back. This seems odd looking at the fact that ESB cards started with 21-backs before moving on to 31- and 32-backs. This SW card, however, is simply a 12-back with a sticker slapped over the bottom half showing the next twenty figures e. A likely reason for this oddity is that Kenner started releasing ESB 31-backs and had some SW 12-backs left over. They wanted to update the card to let people know about the new figures, so they printed up a sticker showing the new figures. These were probably released just after the ESB 31-backs and before the 32-backs came out. These SW 32-backs are fairly difficult to find and could command a price of up to 40% more than book to a buyer interested in such variations.

The first ESB cards were the 21-backs. These are basically the same card at the SW 21-backs with the logo updated for the Empire Strikes Back. These cards are some of the hardest to find and often get prices up to 50% over book. Of all the card variations, the ESB 21-back is probably one of the most sought after even though it may not be the rarest.

Return of the Jedi

ROTJ cards had four card backs starting with a 48-back and proceeding through 65-, 77-, and 79-backs. The 48-back is the tough find of the bunch because it was a transition card like the ESB 21-backs. Kenner was moving all the figures onto ROTJ packaging and this card had the short run before being updated with ROTJ figures on the back.

It is interesting to note that the 65A back has two figures blacked out on the card. These are both Ewoks. The reasoning behind this is that these cards were released before the movie Return of the Jedi was actually in theaters. George Lucas wanted to keep the Ewoks a secret, so he insisted that Kenner not reveal them.

Power of the Force

There was only one card back for this series of figures, the 92A. Figures that come on this card are often the mostly highly priced, even if the figure had been released on an earlier card. This is due to the fact that many less were released and that the nifty packaging which included a collector's coin is usually more sought after by collectors than other carded figures.

These two cards had scenes from the cartoons on the fronts and pictures of the Droids and Ewoks toys on the backs and no widely produced variations exist for the cards.

Trilogos were identical to ROTJ and POTF cards with the exception of the trilingual packaging. Figures packaged on Trilogo cards bring a much smaller price than the same figure on another card back. Most of the Trilogo card backs are the same as their U.S. counterparts, but there are a few differences. There is, for example, a 79-back Trilogo card with the Ewoks blacked out in the same manner as the 65A card. This back does not appear on the U.S. packaging.

There were many other foreign packaged items by Kenner affiliates in Europe, Asia and South America including Takara (Japan), Meccano (Mexico), and Palitoy (England). Some of these packages are very similar to their North American cousins and some are radically different.

Kenner held many promotions for free merchandise. Sometimes these were printed right on the card and at other times they were stickers plastered onto other card backs. Some offers appeared both ways. Here's a run down of the basic promotions that Kenner ran on blister cards:

1. Action Figure Collector's Stand: This offer appeared only on 12-backs and came with two variations, one offering the stand for 2 Proofs of Purchases and $2.00 and the other adding that it could be received free for 12 Proofs of Purchase.

2. Free Boba Fett: This promotion was for the infamous Rocket Firing Boba Fett, none of which were ever actually shipped. The offer has several different appearances with later cards having a sticker slapped over the part of the card touting the Fett with a firing rocket. There are also several expiration extensions which appear as stickers on earlier cards with the offer.

3. Free Secret Star Wars Figure: This offer appeared on several cards extending from Star Wars and into the Empire Strikes Back era. The latest ESB card with the offer revealed that the secret figure was Bossk.

4. Action Figure Survival Kit: This package had several items to be used as accessories to the action figures. The offer ran only on the ESB 41-backs.

5. Star Wars Display Arena: Running on ESB 45-backs, this promotion only had one variation, an extension of the deadline.

7. Free Admiral Ackbar Figure: This offer was touted as a Revenge of the Jedi offer, the name of the third movie before George Lucas decided to change it into Return of the Jedi.

8. Free Nien Nunb Figure: This offer was only on ROTJ 48 backs.

9. Free Emperor Figure: This offer only ran on the 65D card backs.

10. Free Anakin Skywalker Figure: This offer was on card backs from 65-backs through the end of ROTJ 79-backs.

Kenner made one glaring mistake in the line but we didn't realize it until after the fact. Somehow, the names on the cardbacks for two of the bounty hunters of the ESB line were switched. Probably for consistency's sake, the mistake remained through the ROTJ series. To collectors, 4-LOM will always be Zuckuss, and Zuckuss will always be 4-LOM. Now to set the record straight, 4-LOM is the droid looking one and Zuckuss in the insectoid creature with the beige robe. As far as I have been able to determine, when referencing the loose figures it is acceptable to use both names, but for the carded figures the naming mistake is maintained so that the reference matches the name on the figure.

Have a question about a toy you have or one you are looking for?  Send me an e-mail!